A Panda Eating a Hot Dog

This was one of the first phrases we entered when we began playing our client, Kihon Games‘, latest game “SketchPhrase.”

The person who got our phrase did a fairly admirable job with it, but by the end of the game, our cute little phrase ended up looking like Michael Jackson circa “Thriller” wearing a piano on his head and riding a pony.

Such is the joy of “SketchPhrase.” 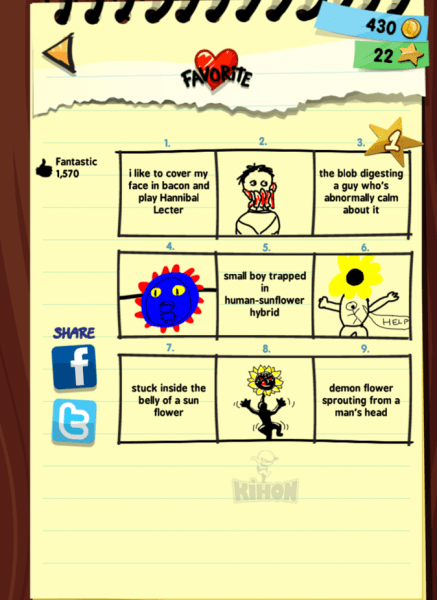 Back in my day, when a fax machine was considered revelatory and we didn’t have iPads and Nintendo Wiis to tide us over, we used to play the ole game of telephone. You know, where you whisper one thing into someone’s ear, and they whisper it back into someone else’s, and by the end of it, an outlandish rumor is now ready to be circulated. “SketchPhrase” takes this concept of telephone and plops it into a reimagined social drawing game for iOS devices.

Kihon Games had been hard at work on “SketchPhrase” while simultaneously putting the finishing touches on their year-long masterpiece, “Dojo Danger.” “Dojo Danger” is aimed for an early January 2013 release. The two games have different genres but share the exact same formula as Kihon’s first game, “Baby Monkey (Going Backwards on a Pig).” And that’s to be the funnest game possible.

Go download “SketchPhrase” for free at the iTunes Store, check out what 148Apps and Appolicious have to say about it, and send us your drawings on Twitter (use #SketchPhrase).

p.s. If you watch the Parry Gripp-created trailer for the game, we guarantee you will not stop singing “SketchPhrase” while you’re playing the game, which may or may not hinder your abilities.