Major leading shoe brand, Skechers, was just slapped with a $50m settlement by the FTC for false advertising related to its Shape-ups products. Before we blame the whole fiasco on Kim Kardashian (because if there’s one thing America can agree on, it’s that Kim Kardashian ruins everything. See: marriages, basketball players, Reggie Bush, Kanye West), the FTC’s ire appears to be Skecher’s emphasis on weight loss and misrepresenting clinical studies within the scope of its campaign. 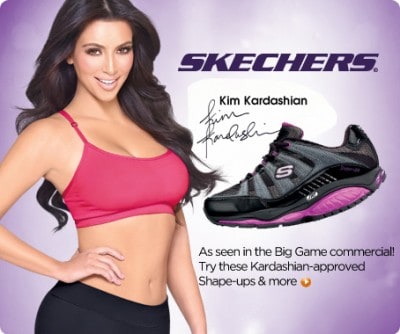 Running ads featuring high-level celebrities (Kardashian, Joe Montana) during the most visible advertising forum (the Super Bowl) hurt Skechers more than it helped. Though the $50m settlement is a small chunk of change for the traditionally billion-dollar company, it’s twice the amount Reebok previously paid for similar charges. Skechers was fined for its claims that the Shape-ups would help purchasers lose weight. Skechers also used a clinical study run by a chiropractor, who just happened to be married to a Skechers executive, in its campaigns, ruining the impartiality of any such study.

So what exactly did Skechers do that hundreds of equally visible, big brands also do on a daily basis?

The health claims that Skechers made appears to have been the nail in its coffin. It’s dangerous, and tricky, territory when products make significant health claims, especially when you’re doing so on a national level like a Super Bowl ad. The Jenny Craig’s of the world have experience enough to be cautious on their wording, and in fact have some statistics that show they’re not complete bald-faced liars. However, taking a shoe and proclaiming it to help a user lose weight better live up to that claim, or consumers will start walking all over your brand.

Does this mean that the FTC, and consumers who clearly raised the flags for the FTC, want more honest advertising? And will they get it?

Chances are, no. Advertising will continue to use any means necessary to lure money out of wallets, regardless of the veracity of what they’re claiming. Perhaps when making genuinely serious claims such as weight loss by a pair of shoes, the mad men of Madison Avenue will be more thoughtful in what they emphasize and not make outrageous claims that prey upon the vulnerabilities of Americans who are willing to try just about anything to lose weight. And just maybe, brands will avoid Kim Kardashian in their campaigns.