Some of the most recent PR blunders were so ridiculous, that you can’t help but laugh (and isn’t laughter the best medicine?). At the same time, each case teaches us to remember some basic PR lessons that it would be wise not to forget, and are so simple they shouldn’t be crushing your mind grapes. 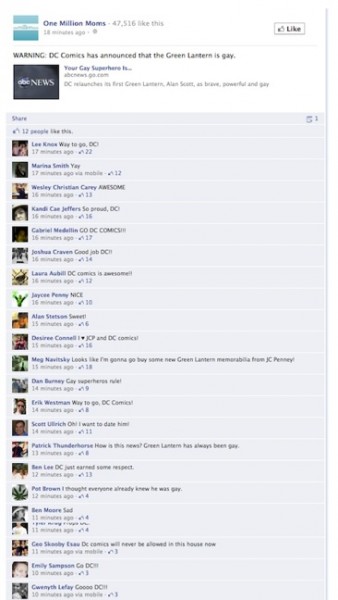 Earlier this month, conservative group One Million Moms attacked DC Comics on their Facebook page, after news leaked that popular character Green Lantern is gay. Tables soon turned, however, when One Million Moms became flooded by positive comments in support of the move by DC Comics. Eventually the original Facebook post was deleted and with their Facebook page now being offline, the group tweeted, “OMM will be offline most of next week for Vacation Bible School!” One Million Moms has also recently been in the news for their dislike of JCPenney’s pro-gay family stance, urging their readers to boycott the retailer because of gay couples being featured in a Mother’s Day and Father’s Day ads, in May and June of 2012  respectively.

Lesson: Don’t ever forget how viral social media has become. After One Million Moms posted their protest against DC Comics on Facebook, media outlets such as Washington Post, Yahoo! Voices, and popular site Reddit all linked their readers onto the group’s Facebook page, letting people show their vocal support for the newly outed Green Lantern and disagreement with OMM’s view. OMM was unprepared for the counter-attack and immediately went offline. If you intend on posting a controversial opinion, then you’d better be ready to take the heat or get out of the Facebook kitchen. See also: Susan G. Komen and Planned Parenthood.

Social media has made it easier than ever before to track news-whether positive or negative. In early November 2011, after a Kansas Youth in Government field trip, Emma Sullivan, Shawnee Mission East High senior, tweeted “Just made mean comments at gov. brownback and told him he sucked, in person #heblowsalot.” Brownback’s office, which monitors social media content with the Governor’s name, blew a gasket over this harmless little Tweet. They contacted her high school, demanding that she write an apology for the disparaging remark. The situation then grew viral when Sullivan’s older sister contacted the media about the asurdity. By the end of that month, Sullivan’s followers grew from 65 to over 12,000 and everyone had a good laugh at Brownback’s office’s expense.

Lesson: Remember the source before you make someone issue a public apology because of a negative tweet. A high school student with only 65 followers didn’t have much influence, but the major media outlets (CNN, Politico, Huffington Post, NY Times) that spread her story definitely did. Not everyone’s going to like you or your brand but they’re entitled to their opinions and you’ll need to choose your battles wisely. A situation that was truly much ado about nothing suddenly became a media firestorm. After all, the press love David vs. Goliath stories. A high school senior vs. a powerful Senator? Comedy (and media) gold.

Chrysler’s official Twitter account (@ChryslerAutos) is run by a PR agency called New Media Solutions. One of their employee, frustrated with Detroit traffic and its drivers, tweeted  “I find it ironic that Detroit is known as the #motorcity and yet no one here knows how to (expletive) drive.” Would’ve been fine-except that tweet came out on the official Chrysler account, making it look like Chrysler was dissing the city of Detroit, a place legendary for its automobile production. Oops. It only took a day before the tweet, employee, and media company were all removed from the Chrysler contract.

Obvious Lesson: When you’re airing frustration on social media, think twice. Sometimes it’s best to just type your frustration and then never click “send” or “tweet.” Take a deep breath, walk away from your computing device, pet a puppy or coo at a baby, and then go back and see if you’re still upset. And if you still want to vent? Make sure you’re on the right account. Even better solution would be to not make negative comments that would adversely affect a client. Social media makes dirty laundry travel faster than you can hit the delete button.