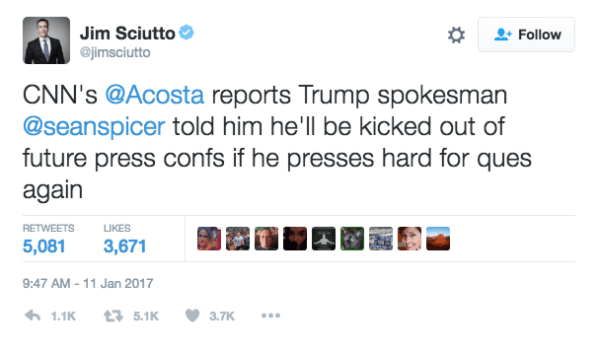 In the new Trump era, it is more important than ever for PR professionals to support journalists and a free media.

Anti-media rhetoric is filling the mouths of talking heads – these so-called “surrogates,” many of whom are inexplicably and rather ironically paid by news outlets to spew rhetoric – and our very own president-elect. The public has grown increasingly hostile toward media. The media themselves don’t often help their cause. But don’t be fooled – the media is never more critical than during regimes like the president-elect’s.

Media absolutely must be held accountable when they make missteps and many of them treat ethics loose and fast. With a lack of training combined with the dangerously alarming speed that reporters must churn out non-fact checked articles, journalism itself has lost a lot of credibility. Despite that, it is not only unfair to malign all of media but detrimental to America’s health as a democracy to do so.

But this isn’t a post about the value of media – we don’t need to emphasize their importance. This is a call to arms to fellow PR professionals to ensure that we’re helping, not harming, the progress of this country. There are many things that PR professionals can do to contribute to a better media landscape, including:

Don’t work with dictators, liars, deceivers and corporations that do very bad things. It’s easy, just say no. You don’t need the business, it should be more important for you to sleep at night. Representing violators of human rights, dictators, oppressive government regimes and outright criminals is bad for business and bad for life. Just. Don’t. Do. It.

Educate your clients on why it’s important to be transparent and honest, and why it’s better business. The public values honesty. Brands that have made mistakes that they’ve owned up to have often been forgiven. It’s the brands that continue to lie and obfuscate who never regain the public’s trust.

Fact check your own statements and reports that clients provide to you. Yes, you work for your client, but you also have a set of ethics. If something doesn’t sound right, take the time to research something to make sure you’re not disseminating lies.

Support journalists by not lying or deceiving them. Share positive articles and don’t normalize behavior like threatening to kick journalists out of news conferences because they’re doing their job.

Ensure that you’re promoting factual news and striking down propaganda and click-bait. Work to ensure that platforms like Facebook and Twitter not populate these fake news links, and debunk any false reports and articles that do arise. As PR pros, media monitoring is an integral part of our job. We see the news before many others, so make sure you’re not spreading unverified stories and let others be aware of ones that are.

Give back and provide pro bono resources for organizations. Like Meryl Streep implored, the Committee to Protect Journalists is one that deserves your support. The Center for Investigative Reporting has also been doing standout work. Pick your passion and go.

Above all, we need to work with journalists to make sure that all of our voices are heard – every citizen, not just those who pay the most money. As public relations professionals, our obligation is to the public, first and foremost. We have a civic duty to use our skills to disseminate stories that are honest, truthful and provide value to the public that we all serve as citizens of this great nation.